California statutes regarding driving under the influence of alcohol and/or controlled substances (DUI) are quite extensive and rather harsh. Whether you've been arrested for a first DUI offense or have been down this road before, it's critical that your rights are protected by a skilled criminal defense attorney who is well-versed in California DUI laws.

At the Sigal Law Group, our DUI lawyers have a great deal of experience representing individuals facing drunk driving charges in Los Angeles. We use all of our skills and knowledge to get clients' DUI charge(s) dismissed or reduced, and to minimize the penalties for these serious offenses. (Reference: http://sheriff.lacounty.gov/dui+impaired+driving+los+angeles+county)

What to Do If You Have Been Arrested for DUI 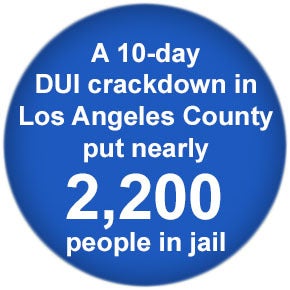 Here is the basic information that any individual arrested for DUI in California should know:

First and foremost, you must, within 10 days of your arrest, request a hearing with the California Department of Motor Vehicles (DMV). If you don't make this request, your driver's license will be automatically suspended — or even revoked 30 days after the arrest. Calendar days count (not just business days Mon–Fri).

You should also be aware that there are two different cases regarding your DUI:

Your DMV hearing will seem rather informal (at least compared to a courtroom), but its outcome is very important. If you need to be driving at all (e.g., to get to work or school), you don't want to let this hearing happen without having a DUI defense attorney fighting on your behalf.

The Criminal Process for Drunk Driving

For many people, their first DUI charge is their very first encounter with the criminal justice system. Millions of people are arrested each year in the U.S. on suspicion of driving under the influence.

However, even a first DUI offense can carry heavy penalties, such as a misdemeanor conviction, incarceration up to one year in jail, and serious fines. Other potential consequences for a DUI conviction include:

A number of factors are considered by a California prosecutor issuing charges related to a DUI arrest, including:

An experienced DUI attorney understands the laws governing DUI convictions and will have the tools necessary to investigate every shred of evidence in your case to ensure the best outcome and minimize your penalties.

If you have been arrested for driving while under the influence, contact a Los Angeles DUI lawyer at the Sigal Law Group immediately for experienced and aggressive DUI defense. We know the system and we can help you.