First time driving under the influence (DUI) charges can be overwhelming. In addition to feelings of shame and embarrassment, individuals face fines, license suspension or revocation, and time in jail. There are certain procedures that must be followed in order to prevent the most severe penalties.

If you or someone you love is arrested for DUI for the first time, it is in your best interest to consult an experienced attorney who will guide you through the legal process and will work to get your charges reduced and your penalties minimized.

If this is your first DUI offense, you should know that there will be two separate cases opened, one with the DMV and one with the court system. 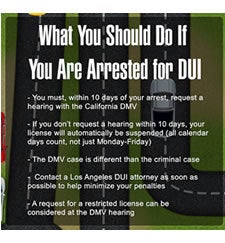 First time DUI offenders in the Los Angeles will have 10 days to request a hearing with the DMV to:

If no hearing is requested, or if DMV officials rule against the accused during the hearing, a 1 year driver's license suspension will be enforced. To reinstate a suspended driver's license after 1 year, individuals will need to take a written drivers exam and show proof of SR-22 insurance (meaning they have proof of having the minimum liability insurance coverage for the state of California).

Individuals charged with DUI in Los Angeles County will be required to have an interlock ignition device (IID) installed on their vehicles for 5 months. The IID requires a breath sample in order for the engine to start. If alcohol is detected in the breath, the vehicle will not start.

Talk to a DUI Lawyer

If you are facing DUI charges for the first time, the Sigal Law Group is here to help. Our attorneys have extensive experience building and arguing strong DUI defenses for people arrested for first, second and third DUIs. They will explain the legal process to you in depth, so you know what to expect. They will also fight aggressively and tirelessly on your behalf to get your charges reduced and to keep you penalties at a minimum.

Being arrested for DUI is scary and stressful. Sigal Law Group will help you understand the process and will make sure your rights are protected every step of the way. To schedule a consultation, please contact our firm today.